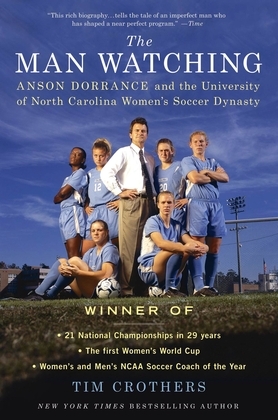 As coach of the University of North Carolina women's soccer team, Anson Dorrance has won more than 90 percent of his games, groomed far more All-Americans, and captured more NCAA championships than any other coach in the sport ten times over. Author Tim Crothers spent four years interviewing Dorrance and Tar Heels players from every era, along with players and coaches from rival college programs, to create the most comprehensive, intimate, and unfiltered look ever inside the most prolific dynasty in college athletics. Updated to include the story of the Tar Heels's 2008 and 2009 NCAA championships, The Man Watching is the authorized biography of a fascinating man and the more than 200 young women he inspired to believe that anything is possible.