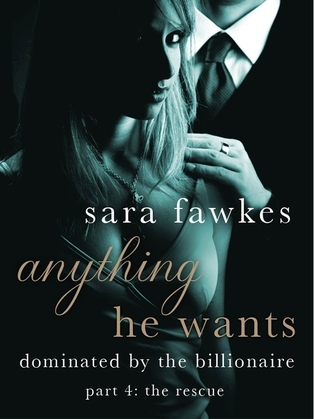 Anything He Wants: The Rescue (#4)

She never met a man like him before, a powerful billionaire who always gets what he wants. Now she's about to enter an exclusive world of glittering opulence and all-consuming passion?where she'll explore the darkest reaches of her own desire.

When Lucy Delacourt signed a contract with Jeremiah Hamilton, she had no idea she'd be caught up in an assassination plot against the billionaire. Barely surviving poisoned champagne, she is whisked away to a beachfront estate in the Hamptons that is fortified like Fort Knox. Safety comes at a price however - even as she learns more about her enigmatic boss, his refusal to let her in on the investigation confuses the still-recovering Lucy. To complicate matters, family members seek to drive them apart, straining their tenuous relationship to the breaking point. All the while, a deadly threat lurks in the background... waiting to strike.
Don't miss the other installments of the scorching serial novel Anything He Wants: The Meeting (Part 1), The Contract (Part 2), The Secret (Part 3) and The Betrayal (Part 5) available now!