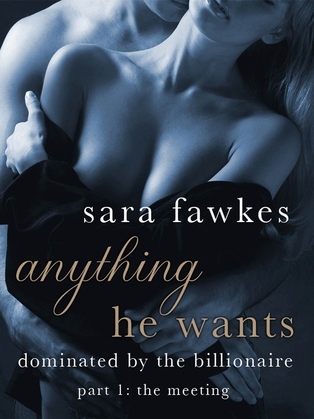 Anything He Wants: The Meeting (#1)

She never met a man like him before, a powerful billionaire who always gets what he wants. Now she's about to enter an exclusive world of glittering opulence and all-consuming passion?where she'll explore the darkest reaches of her own desire.

Lucy Delacourt's office temp position isn't quite her dream job but it pays the bills...barely. The highlight of her day is riding the elevator in the mornings with a handsome stranger. Tall, dark, and sexy as hell, Lucy knows he's way out of her league, but a girl can look, right? Everything changes the day the stranger seduces her. Completely out of character, she yields without a fight, but she has no idea her wanton acts with a man whose name she doesn't know will change her life forever. Because the sexy stranger is none other than Jeremiah Hamilton, billionaire CEO of Hamilton Industries, and one taste isn't nearly enough to satisfy his need.
Don't miss the other installments of the scorching serial novel Anything He Wants: The Contract (Part 2), The Secret (Part 3) and The Rescue (Part 4) and The Betrayal (Part 5) available now!