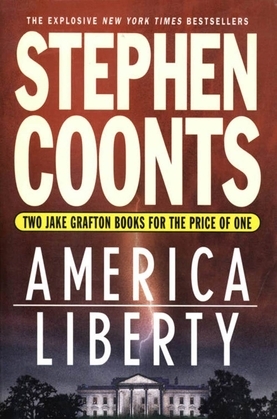 America:
Dispatched on a trial run, NASA's SuperAegis satellite has been created as the foundation of an international antimissle defense system. But moments after dispatch, it vanishes. Rear Admiral Jake Grafton fears something worse than a grave malfunction--he suspects sabotage...The USS America--the world's most technically advanced nuclear submarine--is launched on its maiden voyage. Then shortly after steaming out of harbor, the unthinkable happens. Pirated by terrorists, America disappears beneath the roiling waves of the Atlantic, its Tomahawk warheads aimed directly at the United States...An ingeniously calculated war has been waged--but the rouge enemy is far more insidious than Jake Grafton ever imagined. His mission: ferret out the core group responsible, overtake the stealth sub, and destroy it. But times is running out, and the race is on for Grafton to blow the covert operation out of the water before an entire nation is brought to its knees.

Liberty:
On a quiet park bench in Manhattan---just miles from the ruins of the World Trade Center---spymaster Jake Janos Illin delivers a chilling secret message to Jake Grafton: A rogue Russian general has sold four nuclear warheads to a radical Islamic terrorist group, the Sword of Islam. The group intends to detonate them in America in the ultimate terror strike, the apocalypse that will trigger a holy war between Western civilization and the Muslim world. After passing Illin's message to his superiors, Grafton is charged by the president with the task of assembling a secret team to find the warheads before America's population centers are consumed by a nuclear holocaust.
As he hunts for the terrorists, Grafton soon finds himself up to his neck in power politics, techno-billionaires, money-grubbing traitors, anarchists, and spies. He also discovers that the terrorists don't all come from the Middle East. They come from places close to home. They masquerade as patriots. Some may even have the president's ear.

With the survival of Western civilization at stake, Grafton pulls out all the stops. Calling on the assistance of the indomitable Toad Tarkington, and CIA burglar Tommy Carmellini, he raids the prisons to assemble his team while the clock ticks toward Armageddon.

Peopled with the rich, vivid characters that have made Stephen Coonts famous worldwide, Liberty is all action and suspense from the very first page. And it poses the unanswerable question: How far should civilization go to defend itself from its mortal enemies?