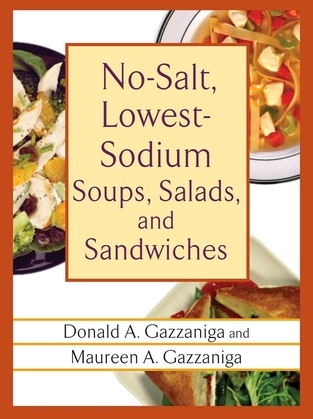 Doctors have always believed that no one could ever get below 1500 milligrams of sodium a daily diet. But Donaldand Maureen A. Gazzaniga have proven them all wrong. After a lot of research, the help of nutritionist daughter, Jeannie, familiarity with the cuisines of many different countries, and hours in the kitchen, Don gathered together hundreds of recipes that never went above five hundred milligrams of sodium a day! Yep! That's five hundred. And the food was delicious.

From these recipes came several "No-Salt, Lowest-Sodium" cookbooks and now, in NO-SALT, LOWEST-SODIUM SOUPS, SALADS AND SANDWICHES, we have gathered together Don's most delicious recipes for soups, salads and sandwiches. Are you ready to eat delicious food and decrease your sodium intake? Then this ebook is for you!