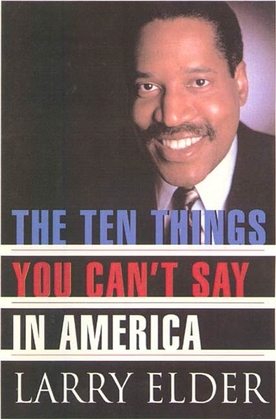 The Ten Things You Can't Say In America

Larry Elder tells truths this nation's public figures are afraid to address. In The Ten Things You Can't Say in America, he turns conventional "wisdom" on its head and backs up his commonsense philosophy with cold, hard facts many ignore. Elder says what no one else will:

Blacks are more racist than whites.
White condescension is mor damaging than white racism
There is no health-care crisis
The War on Drugs is the new Vietnam...and we're losing
Republicans and Democrats are the same beast in different rhetoric
Gun control advocates have blood on their hands.
America's greatest problem? Illegitimacy.
The welfare state is our national narcotic.
There is no glass ceiling.
The media bias: it's real, it's widespread, it's destructive