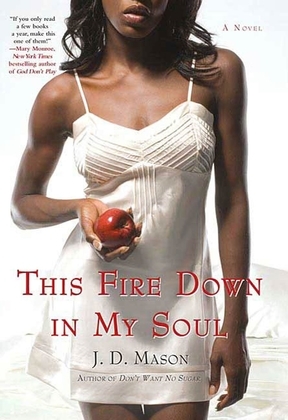 This Fire Down in My Soul

When Faylene Watkins begins counseling women of her husband's congregation at Hope Filled Christian Center church, three women teach her the perils of love, sex and obsession. Choir girl Elise thinks she's found a good man in Jay, a truck driver who came blowing into her life one sultry night. Irresistible and sensual, he's caught up in romancing Elise. However, when she's ready for happily ever after, he realizes that he can't just walk away from his wife and two children. And Elise just can't seem to let him go. Everyone knows that singles ministry leader Renee is full of herself. When she starts her latest interior decorating project, she thinks her client's husband is hot, and together, they're on fire. Meanwhile his wife wants to be friends, and it's not long before a twisted game starts to unravel. For twenty-five years Tess's life revolved around her unfaithful husband (who sits on the deacon's board) and their two wonderful sons. But now the kids have left the nest and Tess wants to spread her wings. While busy seeking her first job and creating a new social life outside the church, Tess meets a new man?a most forbidden man?who rides into the picture to rock her world off its steady axis. All the while, First Lady of the church and counselor, Faye is keeping a secret of her own that is much deeper than any one of them could ever imagine.