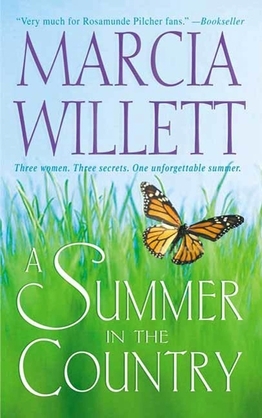 A Summer in the Country

Marcia Willett's previous novel, A Week in Winter, her first to be published in the United States, received a rousing welcome from readers and reviewers alike. Her new novel, A Summer in the Country, introduces an equally beguiling cast of characters whose lives become intricately entwined at Foxhole, a charming and cozy country house on the wild edges of the Devon moors.

Brigid Foster has inherited Foxhole from her father, and has created two guest cottages, which she rents during the holidays to tourists. Brigid's delight at welcoming Louise Parry, one of her regular summer visitors, is tempered by the irritating presence of Brigid's monumentally judgmental mother, Frummie. Having abandoned Foxhole (and Brigid) forty years earlier, Frummie makes no secret of her disdain for the glorious natural splendor of her surroundings, nor of her preference for Brigid's flightly but fabulous half-sister, Jemima. Jemima, meanwhile, has problems of her own.

When a stranger begins lurking in the isolated byways of the lonely countryside, Brigid turns to her oddly elusive father-in-law for comfort and protection. But both Brigid and Louise Parry are hiding certain essential facts, and each woman's fragile sense of haven and security is threatened by disclosure. A Summer in the Country is the story of the enduring, but often painful love that exists between mothers and daughters, fathers and sons, and husbands and wives. It describes with exquisite sensitivity and tenderness the precarious journey each of us undertakes as one generation makes way for the next, as each indelible and priceless relationship grows, changes, blossoms, or dies. Marcia Willett writes novels that will last.