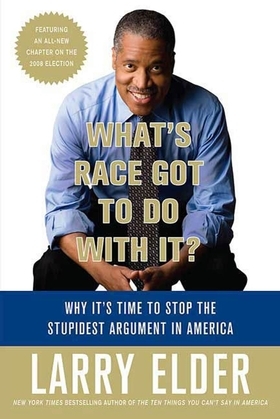 What's Race Got to Do with It?

IS LIFE UNFAIR FOR BLACK AMERICANS?

In What's Race Got to Do with It?, bestselling author Larry Elder takes on the touchiest topic in American life: Race. Some Americans think race is the biggest issue this country faces today. Elder says: What?!? What about the economy, what about war, what about the security of our borders and our citizens?

IS A HUGE GROUP OF CITIZENS BEING KEPT DOWN BY "THE MAN"?

Elder calls for an end to bitching, moaning and whining and the belief that somebody owes you a job, that self-esteem is given out for passing "go", that a black person in a position of authority is always a good thing, whether or not they have credentials and experience. He skewers the loudmouths?and the "mainscream" media?who point to racism as the root of all problems. Elder explains why Hillary Clinton doesn't get it, but Barack Obama does?at least most of the time.

But What's Race Got to Do with It? has a positive message, too: there are leaders and role models today who want to urge everyone to share in the hard work, smart thinking and optimism that make America great and strong.