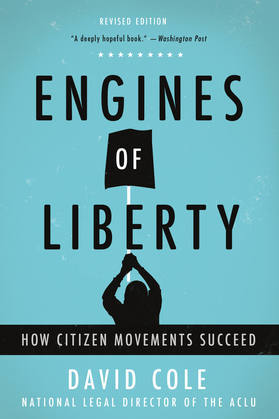 de David Cole (Autor)
No Ficción Ciencias sociales Ciencias políticas Constituciones
From the national legal director of the ACLU, an essential guidebook for anyone seeking to stand up for fundamental civil liberties and rights
One of Washington Post's Notable Nonfiction Books of 2016

In an age of executive overreach, what role do American citizens have in safeguarding our Constitution and defending liberty? Must we rely on the federal courts, and the Supreme Court above all, to protect our rights? In Engines of Liberty, the esteemed legal scholar David Cole argues that we all have a part to play in the grand civic dramas of our era--and in a revised introduction and conclusion, he proposes specific tactics for fighting Donald Trump's policies.
Examining the most successful rights movements of the last thirty years, Cole reveals how groups of ordinary Americans confronting long odds have managed, time and time again, to convince the courts to grant new rights and protect existing ones. Engines of Liberty is a fundamentally new explanation of how our Constitution works and the part citizens play in it.