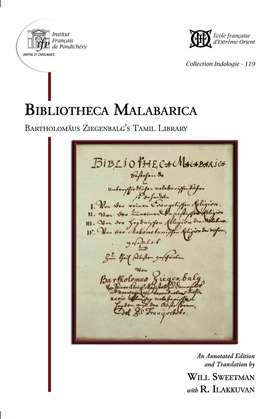 by Bartholomaus (Author), Will Sweetman (Editor), R. Ilakkuvan (Editor)
Excerpt Buy for $6.99
Nonfiction History Literary essays
warning_amber
One or more licenses for this book have been acquired by your organisation details

The Bibliotheca Malabarica is an annotated catalogue of Tamil manuscripts collected by the missionary Bartholomäus Ziegenbalg during his first two years in India (1706–1708). The third section of this catalogue, consisting of 119 entries covering works of Hindu and Jaina provenance, provides a fascinating insight into Tamil literary works in wide circulation on the eve of colonialism. The introduction assesses the character of Ziegenbalg’s library in the context of the sources from which he obtained manuscripts. Will Sweetman’s translation is then augmented by annotations which identify the works and comment on Ziegenbalg’s view of them. It identifies for the first time one text — the Tirikāla cakkaram — which was formative for Ziegenbalg’s view of Hinduism from his earliest letters from India to his magnum opus, the Genealogia der malabarischen Götter (1713). A concluding chapter considers other Tamil works mentioned in Ziegenbalg's writings after 1708.