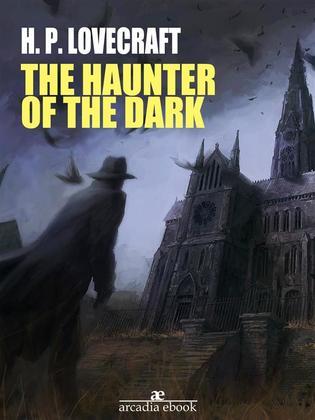 The Haunter of the Dark

"The Haunter of the Dark" is a horror short story written by H. P. Lovecraft in November 1935, and published in the December 1936 edition of Weird Tales (Vol. 28, No. 5, p. 538–53). It was the last-written of the author's known works, and is part of the Cthulhu Mythos. The epigraph to the story is the second stanza of Lovecraft's 1917 poem "Nemesis".

Lovecraft wrote this tale as a reply to "The Shambler from the Stars" (1935) by Robert Bloch, in which Bloch kills the Lovecraft-inspired character. Lovecraft returned the favor in this tale, killing off Robert Harrison Blake (aka Robert Bloch). Bloch later wrote a third story, "The Shadow from the Steeple" (1950), to create a trilogy.

Several of the surface details of the plot were taken directly from Hanns Heinz Ewers' "The Spider", which Lovecraft read in Dashiell Hammett's anthology Creeps By Night (1931).

In Blake's final notes, he refers to "Roderick Usher", an allusion to Edgar Allan Poe's "The Fall of the House of Usher", which Lovecraft described in "Supernatural Horror in Literature" as featuring "an abnormally linked trinity of entities...a brother, his twin sister, and their incredibly ancient house all sharing a single soul and meeting one common dissolution at the same moment." An H. P. Lovecraft Encyclopedia suggests that this interpretation is the key to understanding the ending of "The Haunter of the Dark": "[W]e are to believe that the entity in the church--the Haunter of the Dark, described as an avatar of Nyarlathotep--has possessed Blake's mind but, at the moment of doing so, is struck by lightning and killed, and Blake dies as well."