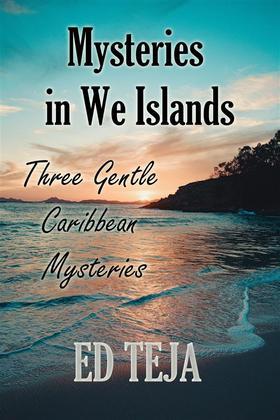 Mysteries In We Islands

Tropical islands, clear, clean water, white sand beaches — images of tranquility. Yet, even there, bad things happen — even murder. But investigations require a different touch in the islands and aren’t handled much like the way they are in bigger, louder, confusing places.

Includes: Death of a Sandman, Sweet Death, and The Missing Skillet

The sand was packed down harder where the gentle waves of the Caribbean Sea rose up and relentlessly pounded it, compacting it. It was cooler to walk on, soothing on the feet after the blistering white sand down to the water.

Johnny Cliff stared out to sea, at the unusual heavy fog that lingered for the second day.

"It's enough to make you think it's an omen," the tall man next to him said.

"So England must be a place of constant omens," Johnny laughed. "You certainly get fog there all the time."

"Not the fog, just the combination of things today. You tell me the morning fog is unusual, yet there it is, and here we also have a dead body. A man is found lying dead on the beach and appears to have been murdered. You told me that murder is uncommon here on the beautiful isle of Kayakoo. That's quite a coincidence."

"First you say it's an omen, now it's a coincidence. All that Scotland Yard attitude of hurrying from one idea to the next doesn't let a man digest any possibility completely. You gonna tire my brain out before lunch, Ralph."

Ralph chuckled. "Well, since I'm on vacation and you are the investigating officer that's the way things ought to be, you being the one getting worn out."

Johnny nodded at the spot up the beach where a small crowd had gathered to watch Doctor Mitchell examine the body. A constable stood with his hands behind his back looking official. "Well let's go see if maybe the doctor can tell us something about this Sweet death."

"The dead man's name is Sweet. I imagine he has a first name, but I'll be damned if I recall anyone using it. He's a boat builder. Or was. I can't see him building any more. And now I gotta get to work, find out if he got done in by an omen or a coincidence."

"You might want to focus on who did him in, rather than what."

"If it was a someone." Ralph's puzzled look made Johnny smile. "I telling you, when there is a murder on the island it's usually pretty plain what happened."

"The view I had of the body seemed plain enough. Let's go see if the doctor has an opinion."

"You just wanting to chat with our fine-looking doctor again."

Ralph looked embarrassed. Johnny loved digging into his British reserve. It offered him scant protection. "I won't say that I'd object to talking with her more."