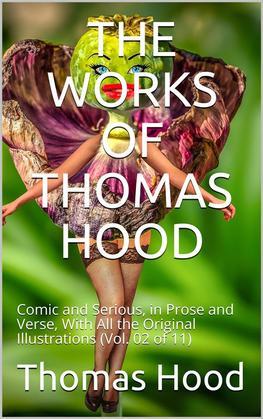 The Works of Thomas Hood; Vol. 02 (of 11) / Comic and Serious, in Prose and Verse, With All the Original / Illustrations

Thomas Hood (23 May 1799 – 3 May 1845) was an English poet, author and humorist, best known for poems such as "The Bridge of Sighs" and "The Song of the Shirt". Hood wrote regularly for The London Magazine, Athenaeum, and Punch. He later published a magazine largely consisting of his own works. Hood, never robust, lapsed into invalidism by the age of 41 and died at the age of 45. William Michael Rossetti in 1903 called him "the finest English poet" between the generations of Shelley and Tennyson. Hood was the father of playwright and humorist Tom Hood (1835–1874).

Before long Hood was contributing humorous and poetical pieces to provincial newspapers and magazines. As a proof of his literary vocation, he would write out his poems in printed characters, believing that this process best enabled him to understand his own peculiarities and faults, and probably unaware that Samuel Taylor Coleridge had recommended some such method of criticism when he said he thought, "Print settles it." On his return to London in 1818 he applied himself to engraving, which enabled him later to illustrate his various humours and fancies.

In 1821, John Scott, editor of The London Magazine, was killed in a duel, and the periodical passed into the hands of some friends of Hood, who proposed to make him sub-editor. This post at once introduced him to the literary society of the time. In becoming an associate of John Hamilton Reynolds, Charles Lamb, Henry Cary, Thomas de Quincey, Allan Cunningham, Bryan Procter, Serjeant Talfourd, Hartley Coleridge, the peasant-poet John Clare and other contributors, he gradually developed his own powers.

In another annual called the Gem appeared the verse story of Eugene Aram. Hood started a magazine in his own name, which was mainly sustained by his own activity. He conducted the work from a sick-bed from which he never rose, and there also composed well-known poems such as "The Song of the Shirt", which appeared anonymously in the Christmas number of Punch, 1843 and was immediately reprinted in The Times and other newspapers across Europe. It was dramatised by Mark Lemon as The Sempstress, printed on broadsheets and cotton handkerchiefs, and was highly praised by many of the literary establishment, including Charles Dickens. Likewise "The Bridge of Sighs" and "The Song of the Labourer", which were also translated into German by Ferdinand Freiligrath. These are plain, solemn pictures of conditions of life, which appeared shortly before Hood's own death in May 1845.

Hood was associated with the Athenaeum, started in 1828 by James Silk Buckingham, and he was a regular contributor for the rest of his life. Prolonged illness brought on straitened circumstances. Application was made by a number of Hood's friends to Sir Robert Peel to place Hood's name on the civil pension list with which the British state rewarded literary men. Peel was known to be an admirer of Hood's work and in the last few months of Hood's life he gave Jane Hood the sum of £100 without her husband's knowledge to alleviate the family's debts. The pension that Peel's government bestowed on Hood was continued to his wife and family after his death. Jane Hood, who also suffered from poor health and had expended tremendous energy tending to her husband in his last year, died only 18 months later. The pension then ceased, but Lord John Russell, grandfather of the philosopher Bertrand Russell, made arrangements for a £50 pension for the maintenance of Hood's two children, Frances and Tom.