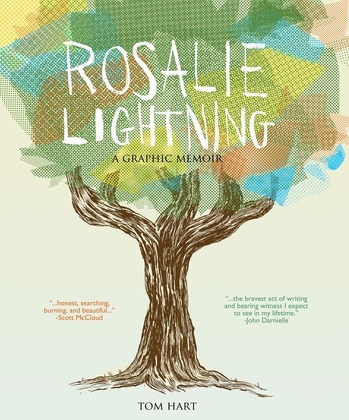 A Goodreads Choice Award Semi-Finalist, Amazon Best Book of 2016, one of The Washington Post's Best Graphic Novels of 2016, and one of Publishers Weekly's 100 Best Books of 2016

ROSALIE LIGHTNING is Eisner-nominated cartoonist Tom Hart's #1 New York Times bestselling touching and beautiful graphic memoir about the untimely death of his young daughter, Rosalie. His heart-breaking and emotional illustrations strike readers to the core, and take them along his family's journey through loss. Hart uses the graphic form to articulate his and his wife's on-going search for meaning in the aftermath of Rosalie's death, exploring themes of grief, hopelessness, rebirth, and eventually finding hope again.

Hart creatively portrays the solace he discovers in nature, philosophy, great works of literature, and art across all mediums in this expressively honest and loving tribute to his baby girl. Rosalie Lighting is a graphic masterpiece chronicling a father's undying love.