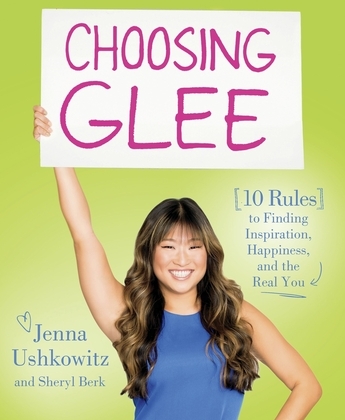 Glee star Jenna Ushkowitz, a.k.a. "Tina," inspires fans to invoke positive thinking into everything they do in this inspirational scrapbook.

Time to Gleek out!

Fans of the breakout musical series will flock to Ushkowitz's heartfelt and practical guide on how to be your true self, gain self-esteem, and find your inner confidence. In Choosing Glee, Jenna shares her life in thrall to performance, navigating the pendulum swing of rejection and success, and the lessons she learned along the way. Included are her vivid anecdotes of everything before and after Glee: her being adopted from South Korea; her early appearances in commercials and on Sesame Street; her first Broadway role in The King and I; landing the part of Tina on Glee; her long-time friendships with Lea Michele (a.k.a. Rachel Berry) and Kevin McHale (a.k.a. Artie); and touring the world singing the show's hits to stadium crowds. Peppered throughout are photos, keepsakes, lists, and charts that illustrate Jenna's life and the choices she has made that have shaped her positive outlook.

Choosing Glee will speak to the show's demographic who are often coping with the very stresses and anxieties the teenage characters on Glee face. Think The Happiness Project for a younger generation: With its uplifting message and intimate format, teens can learn how, exactly, to choose glee.