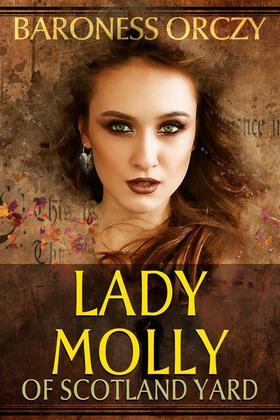 Her fiance is falsely accused and the police are unable to find evidence to support his innocence.

So Lady Molly does the unheard of - she joins the police to improve their methods.

Lady Molly, like her fictional contemporaries, most often succeeded because she recognised domestic clues foreign to male experience. Her entry into the police is motivated by a desire to save her fiancé from a false accusation. Once her superior intuition has triumphed, Lady Molly marries and leaves the force.

This collection of short stories about Molly Robertson-Kirk was written by Baroness Orczy, who is best known as the creator of The Scarlet Pimpernel.

First published in 1910, Orczy's female detective was the precursor of the lay sleuth who relies on brains rather than brawn. The book soon became very popular, as being one of the first novels to feature a female detective as the main character, Orczy's outstandingly successful police officer preceded her real life female counterparts by a decade.

- A CASTLE IN BRITTANY

- THE BAG OF SAND

- THE MAN IN THE INVERNESS CAPE

- THE WOMAN IN THE BIG HAT

WELL, you know, some say she is the daughter of a duke, others that she was born in the gutter, and that the handle has been soldered on to her name in order to give her style and influence.

I could say a lot, of course, but "my lips are sealed," as the poets say. All through her successful career at the Yard she honoured me with her friendship and confidence, but when she took me in partnership, as it were, she made me promise that I would never breathe a word of her private life, and this I swore on my Bible oath–"wish I may die," and all the rest of it.

Yes, we always called her "my lady," from the moment that she was put at the head of our section; and the chief called her "Lady Molly" in our presence. We of the Female Department are dreadfully snubbed by the men, though don't tell me that women have not ten times as much intuition as the blundering and sterner sex; my firm belief is that we shouldn't have half so many undetected crimes if some of the so-called mysteries were put to the test of feminine investigation.

Do you suppose for a moment, for instance, that the truth about that extraordinary case at Ninescore would ever have come to light if the men alone had had the handling of it? Would any man have taken so bold a risk as Lady Molly did when–But I am anticipating.

Let me go back to that memorable morning when she came into my room in a wild state of agitation.

"The chief says I may go down to Ninescore if I like, Mary," she said in a voice all a-quiver with excitement.

"What for–what for?" she repeated eagerly. "Mary, don't you understand? It is the chance I have been waiting for–the chance of a lifetime? They are all desperate about the case up at the Yard; the public is furious, and columns of sarcastic letters appear in the daily press. None of our men know what to do; they are at their wits' end, and so this morning I went to the chief–"

"Yes?" I queried eagerly, for she had suddenly ceased speaking..