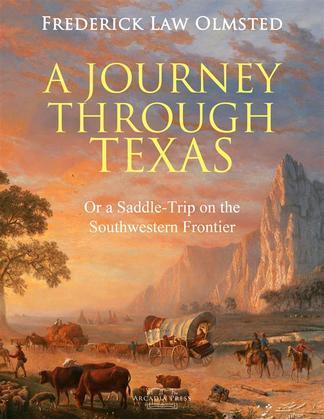 A Journey through Texas

Before he became America's foremost landscape architect, Frederick Law Olmsted (1822–1903) was by turns a surveyor, merchant seaman, farmer, magazine publisher, and traveling newspaper correspondent. In 1856–57 he took a saddle trip through Texas to see the country and report on its lands and peoples. His description of the Lone Star State on the eve of the Civil War remains one of the best accounts of the American West ever published. Unvarnished by sentiment or myth making, based on firsthand observations, and backed with statistical research, Olmsted's narrative captures the manners, foods, entertainments, and conversations of the Texans, as well as their housing, agriculture, business, exotic animals, changeable weather, and the pervasive influence of slavery.  Back and forth from the Sabine to the Rio Grande, through San Augustine, Nacogdoches, San Marcos, San Antonio, Neu-Braunfels, Fredericksburg, Lavaca, Indianola, Goliad, Castroville, La Grange, Houston, Harrisburg, and Beaumont, Olmsted rode and questioned and listened and reported. Texas was then already a multiethnic and multiracial state, where Americans, Germans, Mexicans, Africans, and Indians of numerous tribes mixed uneasily. Olmsted interviewed planters, scouts, innkeepers, bartenders, housewives, drovers, loafers, Indian chiefs, priests, runaway slaves, and emigrants and refugees from every part of the known world—most of whom had "gone to Texas" looking for a fresh start.