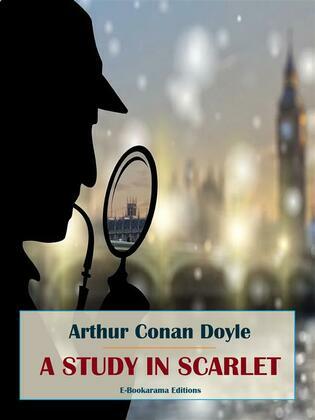 A Study in Scarlet

"A Study in Scarlet" was written in 1886 and published in 1887 in the magazine Beeton’s Christmas Annual, and is one of the four original full-length novels that Arthur Conan Doyle wrote about his genius detective. It is set in late Victorian London and marks the first appearance in literature of the great consulting detective Sherlock Holmes.

In "A Study in Scarlet", Doyle introduces the characters of Sherlock Holmes and John Watson and places them in the crime-solving partnership that lasts for numerous future adventures together. Watson, a physician and British military veteran who is at loose ends after returning from Afghanistan, meets Holmes, an eccentric, well-educated man who solves crimes using unorthodox methods, especially logical deduction.

Watson aids Holmes on a murder case with which Scotland Yard has requested assistance. The body of the victim, Enoch Drebber, has been found in a deserted house...