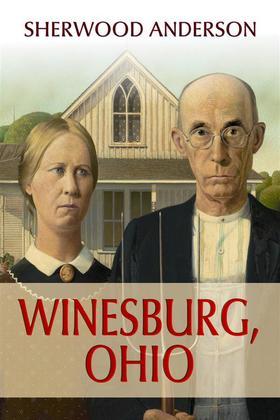 Stories about Midwest characters and their lives - from the inside out.

You might even say, with only slight overstatement, that what Anderson is doing in Winesburg, Ohio could be described as “anti-realistic,” fictions notable less for precise locale and social detail than for a highly personal, even strange vision of American life. Narrow, intense, almost claustrophobic, the result is a book about extreme states of being, the collapse of men and women who have lost their psychic bearings and now hover, at best tolerated, at the edge of the little community in which they live.

Sherwood Anderson was born in Ohio in 1876.

His childhood and youth in Clyde, a town with perhaps three thousand souls, were scarred by bouts of poverty, but he also knew some of the pleasures of pre-industrial American society. The country was then experiencing what he would later call “a sudden and almost universal turning of men from the old handicrafts towards our modern life of machines.” There were still people in Clyde who remembered the frontier, and like America itself, the town lived by a mixture of diluted Calvinism and a strong belief in “progress,” Young Sherwood, known as “Jobby”—the boy always ready to work—showed the kind of entrepreneurial spirit that Clyde respected: folks expected him to become a “go-getter,”

And then, in 1912, occurred the great turning point in Anderson’s life. Plainly put, he suffered a nervous breakdown, though in his memoirs he would elevate this into a moment of liberation in which he abandoned the sterility of commerce and turned to the rewards of literature. Nor was this, I believe, merely a deception on Anderson’s part, since the breakdown painful as it surely was, did help precipitate a basic change in his life.

At the age of 36, he left behind his business and moved to Chicago, becoming one of the rebellious writers and cultural bohemians in the group that has since come to be called the “Chicago Renaissance.” Anderson soon adopted the posture of a free, liberated spirit, and like many writers of the time, he presented himself as a sardonic critic of American provincialism and materialism. It was in the freedom of the city, in its readiness to put up with deviant styles of life, that Anderson found the strength to settle accounts with—but also to release his affection for—the world of small-town America. The dream of an unconditional personal freedom, that hazy American version of utopia, would remain central throughout Anderson’s life and work.

In 1915-16 Anderson had begun to write and in 1919 he published the stories that comprise Winesburg, Ohio, stories that form, in sum, a sort of loosely-strung episodic novel. The book was an immediate critical success, and soon Anderson was being ranked as a significant literary figure. In 1921 the distinguished literary magazine The Dial awarded him its first annual literary prize of $2,000, the significance of which is perhaps best understood if one also knows that the second recipient was T. S. Eliot.

Anderson’s influence upon later American writers, especially those who wrote short stories, has been enormous. Ernest Hemingway and William Faulkner both praised him as a writer who brought a new tremor of feeling, a new sense of introspectiveness to the American short story. As Faulkner put it, Anderson’s “was the fumbling for exactitude, the exact word and phrase within the limited scope of a vocabulary controlled and even repressed by what was in him almost a fetish of simplicity … to seek always to penetrate to thought’s uttermost end.”