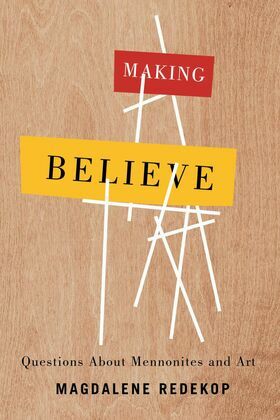 Making Believe responds to a remarkable flowering of art by Mennonites in Canada. After the publication of his first novel in 1962, Rudy Wiebe was the only identifiable Mennonite literary writer in the country. Beginning in the 1970s, the numbers grew rapidly and now include writers Patrick Friesen, Sandra Birdsell, Di Brandt, Sarah Klassen, Armin Wiebe, David Bergen, Miriam Toews, Carrie Snyder, Casey Plett, and many more. A similar renaissance is evident in the visual arts (including artists Gathie Falk, Wanda Koop, and Aganetha Dyck) and in music (including composers Randolph Peters, Carol Ann Weaver, and Stephanie Martin).

Confronted with an embarrassment of riches that resist survey, Magdalene Redekop opts for the use of case studies to raise questions about Mennonites and art. Part criticism, part memoir, Making Believe argues that there is no such thing as Mennonite art. At the same time, her close engagement with individual works of art paradoxically leads Redekop to identify a Mennonite sensibility at play in the space where artists from many cultures interact. Constant questioning and commitment to community are part of the Mennonite dissenting tradition. Although these values come up against the legacy of radical Anabaptist hostility to art, Redekop argues that the Early Modern roots of a contemporary crisis of representation are shared by all artists.

Making Believe posits a Spielraum or play space in which all artists are dissembling tricksters, but differences in how we play are inflected by where we come from. The close readings in this book insist on respect for difference at the same time as they invite readers to find common ground while making believe across cultures.