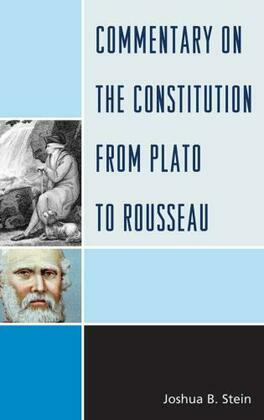 Commentary on the Constitution from Plato to Rousseau

by Joshua B. Stein (Author)
Buy for $51.00 Excerpt
Nonfiction Social science Political science History & theory Constitutions
warning_amber
One or more licenses for this book have been acquired by your organisation details

In an age where scholars, lawyers, judges and just plain folk debate the original intent of the U.S. Constitution, Commentary on the Constitution from Plato to Rousseau demonstrates that the issues confronting the founders—as well as issues of understanding what the founders intended—can be traced back to antiquity. Stein looks at 14 historical figures who—by their words and/or deeds—set the stage for political thought before the constitution was written. All the subjects of this book deal as best they can with questions of the relationship between executive and other branches of government; all deal with the role of religion in government; all deal with how much (if any) democracy should be allowed in determining fundamental law and day-to-day governance; all engaged in the thought experiment of asking what life was like before government, and therefore why government was instituted; all deal with the relationship of central authority and provincial (states') rights; all seek to avoid tyranny. Commentary on the Constitution from Plato to Rousseau is not about what the founders took from previous thinkers and political figures; it is a book that allows the reader to consider the U.S. Constitution while learning about people whose genius has transcended time, from Plato to Rousseau.