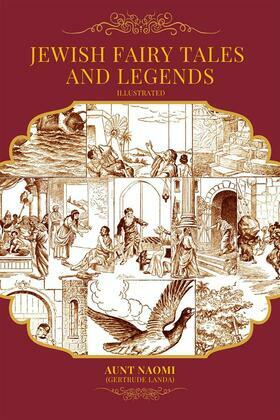 This delightful book presents fairy tales based on Talmudic and rabbinic literature. Aunt Naomi was interested in compiling the folklore and legends of the Jewish people, from the earliest times up until the dawn of the modern era. This Folktales are characterized by the presence of unusual personages, by the sudden transformation of men into beasts and vice versa, or by other unnatural incidents.

Illustrated. 25 fairy tales : The Palace of the Eagles, The Giant of the Flood, The Fairy Princess of Ergetz, The Higgledy-Piggledy Palace, The Red Slipper, The Star-Child, Abi Fressah's Feast, The Beggar King, The Quarrel of the Cat and Dog, The Water-Babe, Sinbad of the Talmud, The Outcast Prince, The Story of Bostanai, From Shepherd-Boy to King, The Magic Palace, The Sleep of One Hundred Years, King for Three Days, The Palace in the Clouds, The Pope's Game of Chess, The Slave's Fortune, The Paradise in the Sea, The Rabbi's Bogey-Man, The Fairy Frog, The Princess of the Tower, King Alexander's Adventures.