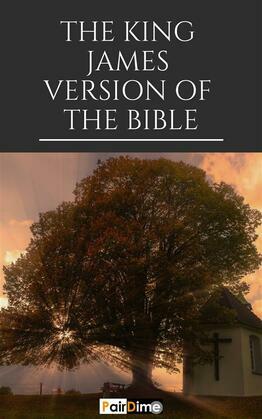 The King James Version of the Bible

by King James Version (Author)
Buy for €1.99 Excerpt
Nonfiction Juvenile Religion Bibles Christian Standard Bible King James version
warning_amber
One or more licenses for this book have been acquired by your organisation details

It was first printed by John Norton & Robert Barker, both the King's Printer, and was the third translation into English approved by the English Church authorities: The first had been the Great Bible, commissioned in the reign of King Henry VIII (1535), and the second had been the Bishops' Bible, commissioned in the reign of Queen Elizabeth I (1568). In Geneva, Switzerland the first generation of Protestant Reformers had produced the Geneva Bible of 1560 from the original Hebrew and Greek scriptures, which was influential in the writing of the Authorized King James Version.

In January 1604, King James convened the Hampton Court Conference, where a new English version was conceived in response to the problems of the earlier translations perceived by the Puritans, a faction of the Church of England.

James gave the translators instructions intended to ensure that the new version would conform to the ecclesiology of, and reflect the episcopal structure of, the Church of England and its belief in an ordained clergy. The translation was done by 6 panels of translators (47 men in all, most of whom were leading biblical scholars in England) who had the work divided up between them: the Old Testament was entrusted to three panels, the New Testament to two, and the Apocrypha to one. In common with most other translations of the period, the New Testament was translated from Greek, the Old Testament from Hebrew and Aramaic, and the Apocrypha from Greek and Latin. In the Book of Common Prayer (1662), the text of the Authorized Version replaced the text of the Great Bible for Epistle and Gospel readings (but not for the Psalter, which substantially retained Coverdale's Great Bible version), and as such was authorized by Act of Parliament.

By the first half of the 18th century, the Authorized Version had become effectively unchallenged as the English translation used in Anglican and English Protestant churches, except for the Psalms and some short passages in the Book of Common Prayer of the Church of England. Over the course of the 18th century, the Authorized Version supplanted the Latin Vulgate as the standard version of scripture for English-speaking scholars. With the development of stereotype printing at the beginning of the 19th century, this version of the Bible became the most widely printed book in history, almost all such printings presenting the standard text of 1769 extensively re-edited by Benjamin Blayney at Oxford, and nearly always omitting the books of the Apocrypha. Today the unqualified title "King James Version" usually indicates this Oxford standard text.