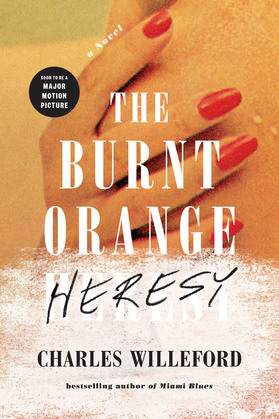 "A spiky romance laced with art-history references and the trappings of a sleekly elegant neo-noir."
--The Hollywood Reporter

Fast-talking, backstabbing, womanizing, and fiercely ambitious art critic James Figueras will do anything--blackmail, burglary, and beyond--to make a name for himself. When an unscrupulous collector offers Figueras a career-making chance to interview Jacques Debierue, the greatest living--and most reclusive--artist, the critic must decide how far he will go to become the art-world celebrity he hungers to be. Will Figueras stop at the opportunity to skim some cream for himself or push beyond morality's limits to a bigger payoff?

Crossing the art world with the underworld, Willeford creates a novel of dark hue and high aesthetic polish. The Burnt Orange Heresy--the 1970s crime classic now back in print--has lost none of its savage delights as it re-creates the making of a murderer, calmly and with exquisite tension, while satirizing the workings of the art world as the ultimate con.