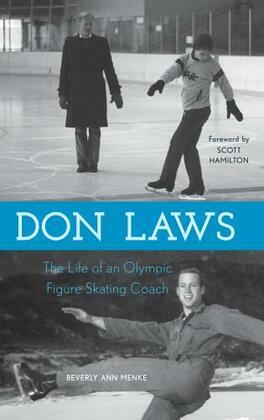 At the 1984 Olympics, American Scott Hamilton skated into the history books when he claimed a gold medal in Sarajevo. Beside him the entire time was his coach, Don Laws. A member of the U.S. Figure Skating Hall of Fame and a U.S. Junior Champion, Laws is one of the most respected and admired ice skating coaches in the world. In addition to Hamilton, Don was the coach of champions Michael Weiss and Patrick Chan. This authorized biography tells the story of Law’s exemplary life and chronicles his singular dedication to figure skating.

Don Laws: The Life of an Olympic Figure Skating Coach recounts Don’s youth, from his childhood in Washington, D.C. to his Junior Men’s Figure Skating Championship to his triumphs as a coach on the international stage. Featuring personal interviews with many of his former pupils, this humorous and enlightening biography captures Don’s dedication to the sport and to his students. In addition, this book goes behind the scenes of the controversial new judging system—for which Laws was one of only four coaches worldwide to take part in its creation—as well as touches upon the break between Don Laws and his star pupil, Patrick Chan.

Including exclusive interviews with Scott Hamilton, Michael Weiss, premier Russian coach Tamara Moskvina, former International Skating Union member Sonia Bianchetti, and current ISU President Ottavio Cinquanta, this book is a one-of-a-kind look at a man who never broke from his beliefs and ideals and never wavered in his love for the sport. A chapter devoted to skating techniques laid out by Laws will be a helpful tool for figure skating coaches; but for the figure skater, and for any fan of the sport, it will be the stories, interviews, photographs, and history that make this book entertaining and inspiring.