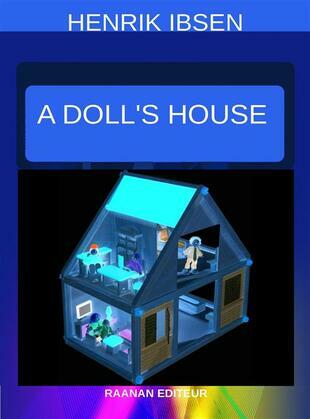 A Doll's House  is a three-act play written by Norway's Henrik Ibsen. It premiered at the Royal Theatre in Copenhagen, Denmark, on 21 December 1879, having been published earlier that month. The play is set in a Norwegian town circa 1879.

The play is significant for the way it deals with the fate of a married woman, who at the time in Norway lacked reasonable opportunities for self-fulfillment in a male-dominated world, despite the fact that Ibsen denies it was his intent to write a feminist play. It aroused a great sensation at the time, and caused a "storm of outraged controversy" that went beyond the theatre to the world newspapers and society.

(SCENE.—A room furnished comfortably and tastefully, but not extravagantly. At the back, a door to the right leads to the entrance-hall, another to the left leads to Helmer's study. Between the doors stands a piano. In the middle of the left-hand wall is a door, and beyond it a window. Near the window are a round table, armchairs and a small sofa. In the right-hand wall, at the farther end, another door; and on the same side, nearer the footlights, a stove, two easy chairs and a rocking-chair; between the stove and the door, a small table. Engravings on the wall; a cabinet with china and other small objects; a small book-case with well-bound books. The floors are carpeted, and a fire burns in the stove. It is winter.

A bell rings in the hall; shortly afterwards the door is heard to open. Enter NORA, humming a tune and in high spirits. She is in out-door dress and carries a number of parcels; these she lays on the table to the right. She leaves the outer door open after her, and through it is seen a PORTER who is carrying a Christmas Tree and a basket, which he gives to the MAID who has opened the door.)

Hide the Christmas Tree carefully, Helen. Be sure the children do not see it till this evening, when it is dressed. (To the PORTER, taking out her purse.) How much?

There is a shilling. No, keep the change. (The PORTER thanks her, and goes out. NORA shuts the door. She is laughing to herself, as she takes off her hat and coat. She takes a packet of macaroons from her pocket and eats one or two; then goes cautiously to her husband's door and listens.) Yes, he is in. (Still humming, she goes to the table on the right.)

Helmer (calls out from his room).

Is that my little lark twittering out there?

Nora (busy opening some of the parcels).

Is it my little squirrel bustling about?