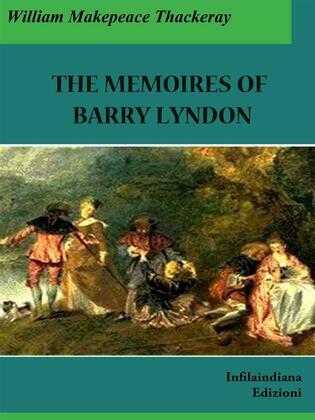 The Memoirs of Barry Lyndon

Published in installments with the title The Luck of Barry Lyndon: A Romance of the Last Century by Fitz-Boodle in the English journal Fraser's Magazine in 1844, The Memoirs of Barry Lyndon narrates, in a picaresque style, the vicissitudes of an Irish adventurer determined to become a member of the English aristocracy. The story is divided into six parts and it is told using the first person by the protagonist himself that, on more than one occasion, tries to hide from the reader his flaws or shortcomings. The reading is therefore quick and pleasant.

William Makepeace Thackeray was born in Calcutta on 18 July 1811. Considered one of the best known English writers of the nineteenth century, he has forever linked his name to two works: Vanity Fair (1846-48) and The Memoirs of Barry Lyndon (1844) which was adapted for film by Stanley Kubrick. He died in London on 24 December 1863.