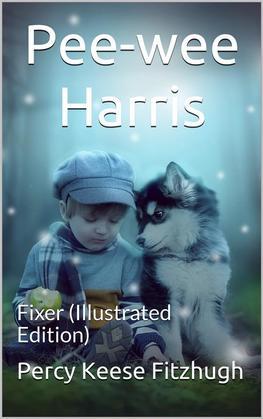 Walter "Pee-wee" Harris is a fictional Boy Scout who has appeared in several series of boy's books by Percy Keese Fitzhugh as well as in a long-running comic strip in the magazine Boys' Life. Originally spelled "Pee-wee", his name has occasionally been spelled "Pee-Wee" and is spelled "Pee Wee" in the Boys' Life comic strip.

Pee-wee Harris first appeared in 1915 as a supporting character in Fitzhugh’s series of novels about the Boy Scouts of "Troop 1, Bridgeboro, NJ". Though Pee-wee is small of stature and young of age, he is the quintessential First Class Boy Scout. He is almost always wearing one of his many Scout uniforms, and carries a compass, a pocketknife, a belt axe, and some food to appease his never-ending appetite. His fellow Scouts would say that "Pee-wee is not in the Boy Scouts, the Boy Scouts are in him."

His adventures were so numerous that in 1922 Pee-wee was given a book series of his own. The series revolves around him using Scouting skills such as signaling and stalking to have adventures and solve mysteries. The hero of these stories usually gets himself into predicaments through his enthusiasm for the Scout way and his noble intentions. But Pee-wee is the kind of boy who always lands on his feet. He takes a situation that he manages to screw up with his zeal and, with his Scout knowledge and a huge dose of luck, always seems to come out on top. “Even when he loses, he wins”. The series also featured other Scouts from the "First Bridgeboro Troop" such as Tom Slade, Roy Blakeley, and Westy Martin, who each also had their own series of books, the first two preceding the Pee-wee series and the last following it. The Pee-wee Harris book series ran until 1930.

Like many of the Scouts in Fitzhugh's novels, Pee-wee was based on a real person, in Pee-wee's case – one Al Gar Bloom, whose father ran a newsstand near Fitzhugh's studio in Hackensack, New Jersey. Al, himself a Scout, would regularly pester Mr. Fitzhugh to see the manuscripts before they were sent off to his publisher. When the Pee-wee Harris series began; Al was the natural choice as the Scout who would grace the cover of the first volume. Al lived in Hackensack for many years, eventually becoming a reporter for the Bergen Evening Record. In an interview given in the 1970s, Al had this to say about PKF’s books: “Fitzhugh’s books – moral, humorous – were well suited to my generation just as the Rover Boys, Horatio Alger and Oliver Optic were rigidly keyed to the moral tone and drive for material success of their respective eras.”