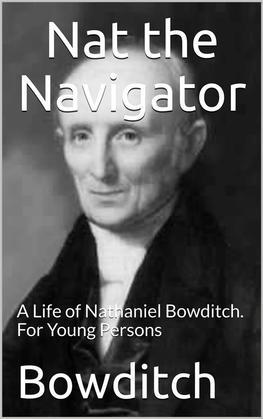 Nat the Navigator / A Life of Nathaniel Bowditch. For Young Persons

by Henry Ingersoll Bowditch (Author)
Buy for €4.49 Excerpt
Nonfiction Biography & autobiography Adventurers & explorers
warning_amber
One or more licenses for this book have been acquired by your organisation details

Nathaniel Bowditch was an early American mathematician remembered for his work on ocean navigation. He is often credited as the founder of modern maritime navigation; his book The New American Practical Navigator, first published in 1802, is still carried on board every commissioned U.S. Naval vessel. In 2001, an elementary and middle school in Salem was named in his honor.

Nathaniel Bowditch, the fourth of seven children, was born in Salem, Province of Massachusetts Bay, to Habakkuk Bowditch, a cooper, and Mary (Ingersoll) Bowditch. At the age of ten, he was made to leave school to work in his father's cooperage, before becoming indentured at twelve for nine years as a bookkeeping apprentice to a ship chandler.

In 1786, age fourteen, Bowditch began to study algebra and two years later he taught himself calculus. He also taught himself Latin in 1790 and French in 1792 so he was able to read mathematical works such as Isaac Newton's Philosophiae Naturalis Principia Mathematica. He found thousands of errors in John Hamilton Moore's The New Practical Navigator; at eighteen, he copied all the mathematical papers of the Philosophical Transactions of the Royal Society of London. Among his many significant scientific contributions would be a translation of Pierre-Simon de Laplace's Mécanique céleste, a lengthy work on mathematics and theoretical astronomy. This translation was critical to the development of astronomy in the United States.

In 1795, Bowditch went to sea on the first of four voyages as a ship's clerk and captain's writer. His fifth voyage was as master and part owner of a ship. Following this voyage, he returned to Salem in 1803 to resume his mathematical studies and enter the insurance business. One of his family homes in Salem, the Nathaniel Bowditch House, still exists and was restored in 2000. This house has been designated a National Historic Landmark

Bowditch's mathematical and astronomical work during this time earned him a significant standing, including election to the American Academy of Arts and Sciences in 1799 and the American Philosophical Society in 1809. He was offered the chair of mathematics and physics at Harvard in 1806, but turned it down. In 1804, an article on his observations of the Moon was published and in 1806 he published naval charts of several harbors, including Salem. More scientific publications followed, including a study of a meteor explosion (1807), three papers on the orbits of comets (1815, 1818, 1820) and a study of the Lissajous figures created by the motion of a pendulum suspended from two points (1815).

Bowditch's move from Salem to Boston involved the transfer of over 2,500 books, 100 maps and charts and 29 volumes of his own manuscripts.