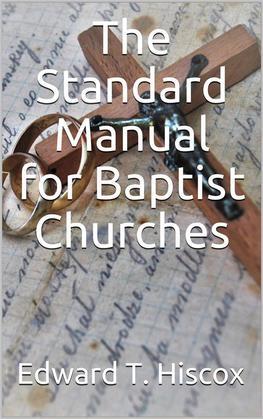 The Standard Manual for Baptist Churches

by Edward Thurston Hiscox (Author)
Excerpt Buy for €3.99
Nonfiction Reference Handbooks & manuals
warning_amber
One or more licenses for this book have been acquired by your organisation details

It is now thirty years since the “Baptist Church Directory,“ prepared by the writer, was first published. That work was designed to be somewhat of a consensus of the opinions of those best able to judge in matters of Baptist church polity and usage, especially as to what concerns administration and discipline. It might thus prove a help to both pastors and members, particularly in perplexing cases liable to arise. Thus it was hoped it might help to rectify the order and customs of our churches through our widely extended ranks. This hope has been realized. More than fifty thousand copies of that book have been circulated in this country. It has also been translated, more or less fully, into six or seven different languages by our missionaries, for use in our missions and foreign fields.

The preparation of the present manual was undertaken at the request of, and by an arrangement with the pastor, R. S. MacArthur, D.D., on behalf of Calvary Baptist Church, New York City, for the special use of that church. Something was desired smaller than the “Directory,” and more full than the “Star Book,” embracing certain features of the “Short Method.” When completed, it was thought to be, on the whole, so much superior to anything ever before prepared, as a manual for general use in Baptist churches, that by mutual consent, it was decided to have it published for general circulation, rather than confine it to the use of a single church.

To both ministers and members, such a manual, it is hoped, will prove a valuable helper in the interest of church order, and of denominational unity and prosperity. Especially for the younger members, so many thousands of whom are yearly admitted to the fellowship of the churches, with an unlimited franchise, while but imperfectly instructed as to either doctrines or order, it should prove a most valuable assistant. Concise and accurate in statement of facts, transparent in arrangement of matters, convenient in form, and cheap in cost, pastors will find it to their own advantage, as well as to that of their members, to see that their churches are liberally supplied with copies. The pastor of one of our very largest and most prosperous churches, for whose use its preparation was undertaken, shows his estimate of its value, and sets other pastors a wise and worthy example, by ordering in advance of publication, one thousand copies for his church.