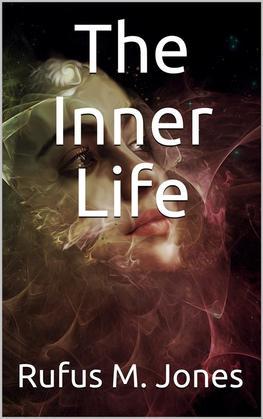 Jones, a late renowned Quaker scholar, or member of the Society of Friends, seeks to integrate science with the inner life, the inwardness practiced in Quakerism's silent waiting on the Light.

One of his major points is how life in general points to a spiritual environment in which life finds its being, this life being in dialogue with the 'other side,' so to speak. The world of matter hints at a spiritual inspiration that informs it and leads it to mutations, such as in evolution, that cannot be explained from within the process itself, as science cannot explain the reason for these 'leaps' in the process otherwise consistent and true to cause-and-effect. Jones informs on how non-religious researchers point this out in their studies, so he does not simply present the reader with religious presumptions. Likewise, Jones applies this even to the most ordinary of happenings, showing how any comprehension of and commentary on experience is transcendent of the experience at the level of the experience itself.

In these matters, as in the more devotional parts of this treatment, Jones can baffle at presenting complexity in the garb of simplicity, leaving the reader somewhat perplexed, as most writers tend toward being simple or complex; we could say, and paradoxically, Jones is scholastically devotional.

Jones leaves us with the question of whether these profundities in the common life point to a Source, a Being, or to complex depths inherent to life, our not yet having the tools to explore the yet-discovered depths of matter-and~mind itself. If the latter, life witnesses only to its profundity; if the former, life hints at a surrounding Beingness, however differently spoken of over time and place, a Being the potential for being. Both are likely true, yet Jones does not explore that in his conclusion, leaving us with the impression of an either-or polarity, this not being in sync with the work prior.

The treatise, over-all, leaves me no doubt that Jones concludes we are surrounded with a spiritual environment, and matter cannot explain itself. This is clear throughout the book. Jones, however, as is true of Quakers generally, does not reify this Otherness, even when referring to traditional language and Scriptures of the Christian communities. He reflects the practice of Quakerism, seeing faith more experiential and metaphorical, though no less real than traditional faiths or sciences, yet real in a more in-depth manner for addressing the Depth 'below' the surfaces intimating that Depth.

The book provides a look into Quaker spirituality, howbeit by one Quaker representing one approach ~ Friends is a widely divergent group, from evangelical conservative to progressive ~ a movement that arose from traditional Christianity, but responded, in its estimation, to the ritualism of Catholic Christianity and the idolization of the Bible by Protestantism. Jones mirrors indebtedness to that Christian faith, as in quoting prior Christian thinkers, like Augustine of Hippo, while showing how Christian faith diverged into accenting form; from being a spirit movement to being, first, a Church movement (Catholicism), then, a Bible movement (Protestantism). Yet, amid these lessons, the book is principally, directly a spiritual exposition, to inspire anyone who seeks to retain devotion to truth within Christian Scriptures, a truth universal and free of all Scriptures, and love for the 'Christ,' or 'Light' transcending all faiths and thought, experienced only directly 'within'.