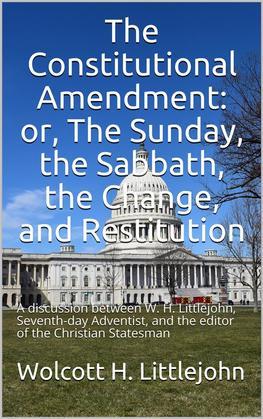 The Constitutional Amendment: or, The Sunday, the Sabbath, the Change, and Restitution / A discussion between W. H. Littlejohn, Seventh-day / Adventist, and the editor of the Christian Statesman

by Wolcott H. Littlejohn (Author)
Buy for €4.49 Excerpt
Nonfiction Social science Political science Constitutions Law Public Constitutional
warning_amber
One or more licenses for this book have been acquired by your organisation details

As it has been thought best that the following articles, which, with the exception of the Replies and Rejoinders, have already been published in the Christian Statesman, the Sabbath Recorder, and the Advent Review, should have a still wider circulation, it has been at last decided to present them to the public in the form of the present volume.

The occasion of their first appearance was as follows: Within the last few years, a party has been organized in this country, whose especial aims are the amendment of the Constitution, so that the names of God and Christ may appear in it; the recognition in the same instrument of the Bible as the fountain of national law; the securing of the reading of the Bible in the common schools; and the enforcement by law of the observance of Sunday, as the Christian Sabbath. Slowly, but steadily, the friends of this movement are bringing it to the public notice and enlarging the circle of its active supporters. A single glance at the existing state of affairs reveals the fact that, at no distant date, the issues which these men are making up will be the ones over which contending parties will wage fierce contest. Already the press of the country, by the drift of events which they find themselves incapable of controlling, are compelled, almost daily, to record transactions which are not only calling the attention of the people to a conflict which is both imminent and irrepressible, but which are also continually adding fuel to a flame which even now burns with a fierceness and volume indicative of its future scope and power.

In view of these facts, the writer of the subjoined articles, while taking no particular interest in party politics, merely as such, nevertheless felt a profound conviction that the time had come, in the providence of God, when Christian men should offer a solemn protest against a state of affairs which, while ostensibly inaugurated in the interest of the kingdom of Christ, will ultimately prove most destructive of religious liberty. This, he therefore attempted to do, purely from the stand-point of the Bible. Through the courtesy of the editor of the Christian Statesman, which paper is the organ of the amendment party, the first seven of the following communications were permitted to appear in the columns of that periodical. Subsequently, the editor of that paper felt it incumbent upon him to take issue with what was thus published, and to answer the same in a series of editorial articles. To these again, the author of the original communications published a series of rejoinders, in defense of the positions assumed by him in the outset, and in controversion of those of the reviewer. These articles, the replies of the editor, and the rejoinders thereto, having been grouped together in the present volume, are offered to a candid public for serious consideration.

The reader will readily perceive that the whole discussion turns upon the Sabbath question. Fortunately, also, he will discover that the ground covered in the debate by the respective disputants is that generally occupied by the classes of believers whom they represent. Leaving him, therefore, to decide for himself as to which of the views presented has the sanction of the divine mind, the writer of the present preface can do no more than to give expression to his earnest desire that the God of all truth will vouchsafe his Spirit for the illumination of every mind which comes to the consideration of this subject with an honest purpose to ascertain his will in the matter under consideration.