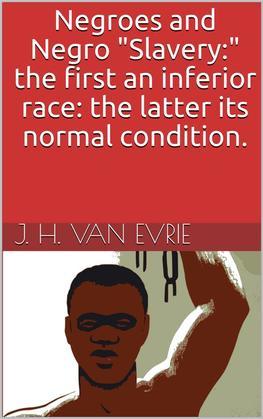 Negroes and Negro "Slavery:" the first an inferior race: the latter its normal condition.

by J. H. Van Evrie (Author)
Buy for €4.49 Excerpt
Nonfiction Social science Slavery
warning_amber
One or more licenses for this book have been acquired by your organisation details

Since the first edition of this work was issued, startling and deplorable events have occurred. The great “Anti-Slavery” delusion, that originated with European monarchists more than fifty years ago, has culminated in disunion and civil war, as its authors always predicted it would. A party strongly imbued with the false theories and absurd assumptions of British writers and abolition societies, is in possession of the Federal Government, which it stands pledged to use to reduce its assumptions to practice. It holds that the negro, except in color, is a man like themselves, and naturally entitled to the same liberty—that to deny him this liberty, is to enslave him—that, therefore, Southern society is wrong, and should be revolutionized, and it avows it to be its mission to accomplish this—to institute a policy that shall finally abolish or destroy the supremacy of the white man, and secure “impartial freedom” for negroes! To this the South replies, that this government was created for white men alone, and their posterity, as declared in the preamble to the Constitution—that the Supreme Court has recently declared the same great truth—that, seizing the government by a mere sectional vote, and placing it in distinct conflict with the social order of the South, with the avowed purpose of penning up its negro population, in order to bring about some day the extinction or overthrow of the existing condition, is, therefore, an overthrow of the Constitution—that the object avowed necessarily involves their future destruction, and to save themselves from the wild delusion and malignant fanaticism of the North, they are forced, in self-defense, to withdraw from the Union, hitherto, or until this hostile and dangerous party entered the field, so beneficial to all sections of the country.

In conclusion, the author begs to say, that mere literary display or fine writing is with him quite a subordinate consideration. He only desires to be understood, and, that the grand and momentous truths described in this book shall be clearly comprehended by the masses, with the confident assurance that when they come to understand that their own liberty, welfare, and prosperity are all hazarded in a blind crusade after that which, could it be accomplished, would be the greatest calamity ever inflicted on a civilized people, the causeless and senseless, but frightful sectional conflict now raging will be speedily terminated by the universal uprising of the northern masses in favor of a government of WHITE MEN, and UNION with the South.