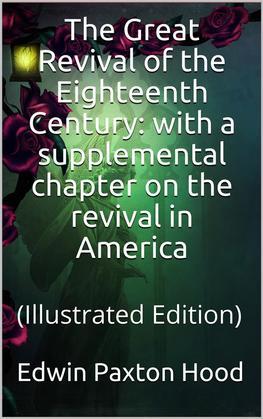 The Great Revival of the Eighteenth Century: with a supplemental chapter on the revival in America

by Edwin Paxton Hood (Author)
Buy for €4.49 Excerpt
Nonfiction Human science Philosophy Religious Esotericism, occult Paranormal
warning_amber
One or more licenses for this book have been acquired by your organisation details

Originally published as a series of papers in the Sunday at Home, * * * they are only Vignettes—etchings. The History of the great Religious Movement of the Eighteenth Century yet remains unwritten; not often has the world known such a marvellous awakening of religious thought; and, as we are further removed in time, so, perhaps, we are better able to judge of the momentous circumstances, could we but seize the point of view.

The only changes made in revising this work are in the local allusions to England as “our country,” etc., and in a few phrases and expressions naturally arising from the original preparation of the chapters for successive numbers of a magazine. If any reader thinks that the Author’s enthusiasm in his subject has caused him to ascribe too great influence to the “Methodist movement,” and not to give due recognition to other potent agencies in the “great awakening” of the last century, let him remember that this volume does not profess to give a complete, but only a partial history of the Great Revival. Indeed, the Author’s graphic pictures relate chiefly to the movement, as it swept over London and the great mining centres of England, where the truth, as proclaimed by the great leaders, Whitefield, the Wesleys, and their co-laborers, won its greatest victories, and where Methodism has ever continued to render some of its most valiant and glorious services for Christ. It is not to be inferred that in Scotland, Ireland, and in the American colonies, as in many portions of England, other organizations, dissenting societies and churches were not a power in spreading the Great Revival movement.

A brief chapter has been added at the close, sketching some phases of the revival in the American colonies, under the labors of Edwards, Whitefield, the Tennents, and their associates. Whatever other material has been added by the Editor is indicated by brackets, thus leaving the distinguished Author’s views and expressions intact.

An Index has also been added, to increase the permanent value of the book to the reader. If the history of the remarkable “religious awakenings” of the eighteenth century were more diligently studied, and the holy enthusiasm and wonderful zeal of those great leaders in “hunting for souls” were to inspire workers of this century, what marvellous conquests and victories should we witness for the Son of God!