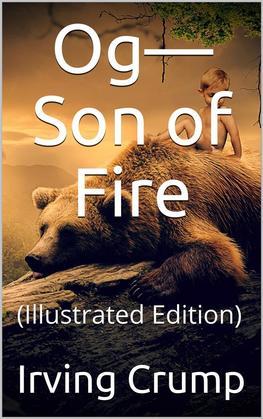 by Irving Crump (Author)
Buy for €3.99 Excerpt
Nonfiction Juvenile Adventure & adventurers Animals
warning_amber
One or more licenses for this book have been acquired by your organisation details

Og, son of Og, who was called Son of Fire, because he brought fire to his people (let it now be known), takes the reader on an odyssey, as he escapes from a band of apes to worse disasters before finally reaching home, an older and wiser Cave Boy. Og, for all his youth, might be the Genius of Man embodied, for he solves his problems in an academic way (by wrinkling his primordial brow).

All the beastly world seems ""determined"" to do him in; even the sabre-toothed tiger attacks with thoughtful purpose. The only creatures who are not out to get him are two wolf cubs that he finds and who immediately become his obedient, loyal, loving, and thoughtful best friends. On the death of one of his ""dogs"" (Og's dad coined the word), he feels a strange new emotion and sheds a tear. Og coolly scoffs at witch doctors and is aghast at the idea of cannibalism. And his ""Hi-yah!"" speech is pure, cultured Cave-Boyese next to that of Crooked Hand, a Flathead, whose ""whoo! Them not friendly people, Og. Them bad fellah,"" sounds like Bora-Bora pidgin via the Lone Ranger's Tonto.

After living through uncountable terrors, Og cleverly survives an avalanche, and as he is feasting on a find of frozen dinosaur, along comes a group of boys whose bearskins look strangely familiar. Og is home at last. Edgar Rice Burroughs, thou shouldst be living now!