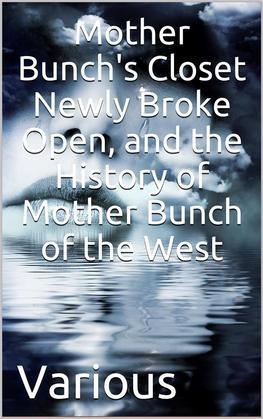 This chap-book is not a story. It is a collection of charms and dreams supposed to have been communicated by a personage bearing the name of Mother Bunch, a name unhistorical and, so far as I have been able to ascertain, unknown to any other department of literature.

From the wording of its title, “Mother Bunch’s Closet Newly Broke Open,” there is evidence of the first part being a continuation of a chap-book already issued upon the same subject. For this we must refer to a jest-book first published in 1604, the title of which runs as follows: Pasquil’s Jests, mixed with Mother Bunche’s Merriments...... This book is a well-known collection of jests of a rather broad nature, and its style of composition lent itself to a continuation such as we have in the chap-book now under consideration. There is no other connection between the two publications than the title.

The later editions of this chap-book differ considerably from that of 1685 in the Pepsyian Collection. Almost every page varies, and that too in no inconsiderable manner. It is not perhaps necessary to point out all the variations because they are not of great literary or historical interest, but it may be well to indicate the chief differences. The 1685 edition, as here printed, contains two parts. These in later editions are amalgamated, and the title on page 10, “The second part of Mother Bunch, who lived at Bonny Ventor in the West,” does not therefore appear. As a specimen of the later editions, the following is the opening passages of the 1780 edition, and other pages are similarly altered: