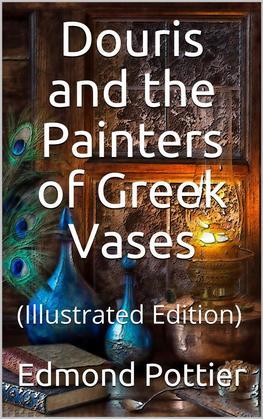 Douris and the Painters of Greek Vases

by Edmond Pottier (Author)
Buy for €4.49 Excerpt
Nonfiction Nature, recreation and sports Artistic activities Painting
warning_amber
One or more licenses for this book have been acquired by your organisation details

It is characterized by a loaded ornamentation and by the diversity of border patterns. The favorite subjects are banquets, komoi (processions of drunk people) or warriors. The favorite kalos name is Khærestratos. Beazley suggests that at that time, Douris could have worked side by side with Onésimos, another great painter of cups of the period. Compared to the latter, Douris favors the grace of his characters.

This is the most characteristic phase of Douris, and its peak. The medallion borders are characterized by the alternation of a meander element and tiles; palmettes decorate the handles of the cup. The preferred kalos name is now Hippodamas; signatures are becoming scarce. Douris returns to banquet scenes, and is also interested in warrior studies and school scenes. The masterpiece of the period is the cup known as the "pietà of Memnon": Eos takes away the body of his son Memnon , killed by Achilles during the Trojan War.