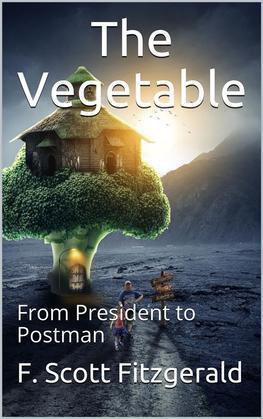 The Vegetable, or From President to Postman

The Vegetable, or From President to Postman is a short story by F. Scott Fitzgerald that he developed into a play.

In the original publication of The Vegetable, or From President to Postman (1923), F. Scott Fitzgerald included the following quotation on the title page: “Any man who doesn’t want to get on in the world, to make a million dollars, and maybe even park his toothbrush in the White House, hasn’t got as much to him as a good dog has—he’s nothing more or less than a vegetable.” Fitzgerald used this quotation, which he claimed came “from a current magazine,” as a springboard for his only published play. This comic romp satirizes the ambitions of an ordinary man who wants to be President of the United States—that is, if he cannot make it as a postman.

The play concerns the misadventures of the middle-class striver Jerry Frost. He is a 35-year-old "clerk for the railroad at $35,000 a year. He possesses no eyebrows, but nevertheless he constantly tries to knit them." His marriage to Charlotte (30) is dull, and he is stereotypically hen-pecked by her (cf. Ralph Cramden, Fred Flintstone, Homer Simpson, et al.). We learn in the first act that Jerry wanted to be a postman, but that he somehow blames his wife for missing out on this ambition...