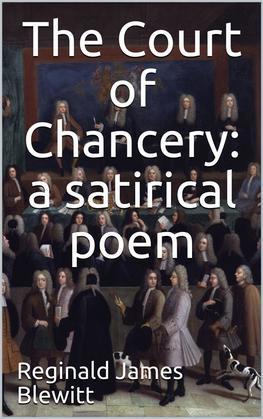 The Court of Chancery: a satirical poem.

The Court of Chancery was a court of equity in England and Wales that followed a set of loose rules to avoid the slow pace of change and possible harshness (or "inequity") of the common law. The Chancery had jurisdiction over all matters of equity, including trusts, land law, the estates of lunatics and the guardianship of infants. Its initial role was somewhat different: as an extension of the Lord Chancellor's role as Keeper of the King's Conscience, the Court was an administrative body primarily concerned with conscientious law. Thus the Court of Chancery had a far greater remit than the common law courts, whose decisions it had the jurisdiction to overrule for much of its existence, and was far more flexible. Until the 19th century, the Court of Chancery could apply a far wider range of remedies than common law courts, such as specific performance and injunctions, and had some power to grant damages in special circumstances. With the shift of the Exchequer of Pleas towards a common law court and loss of its equitable jurisdiction by the Administration of Justice Act 1841, the Chancery became the only national equitable body in the English legal system.

The great delay and ruinous expenses of a Chancery suit have become proverbial. Shame to the country, that suffers such a stain upon its system of equitable jurisprudence! I offer no apology for taking up the tomahawk of censure against this dire national enemy. Would that I could use the weapon more dexterously! It must, however, be sufficient satisfaction for me to have removed the scalp of concealment, without being too particular about the skill, with which it has been effected.

As a poet, I must throw myself upon the indulgence of the public. For the last ten years I have sacrificed every literary attainment to the study of the law; and am therefore in the situation of a miner, who, after years of cheerless labour underground, should be expected to display any great ingenuity in the pursuit of a more enlightened occupation.

The subject is dull, but not unfruitful. I have thrown into the work as much amusement as my poor abilities would furnish me with, but my principal objects have been truth and consistency.—I presume, therefore, to assert that I have always been honest in commendation, and never severe without reason.

I wish it to be distinctly understood that, in my character of a vicious attorney, I do not mean to represent the profession at large. There are in town and country many upright practitioners, of whose friendship I should feel proud. A lawyer, however, may be often dishonest without the fear of detection, and indeed almost without the consciousness of doing wrong. In his practice the boundaries between good and evil are very slight, and may be imperceptibly transgressed. There is little merit in one, whom the fear of punishment deters from the commission of crime; but not to practice knavery when it can be done with ease and infinity is at all events a negative virtue deserving of no slight consideration.

The idea of writing this poem first occurred to me in the Park of Fontainebleau, where I composed the greater part of it. During its progress I have had no opportunity of referring to any publication on the subject, and have, therefore, been compelled to draw very largely on my memory. This must be my excuse for any errors into which I may have fallen.