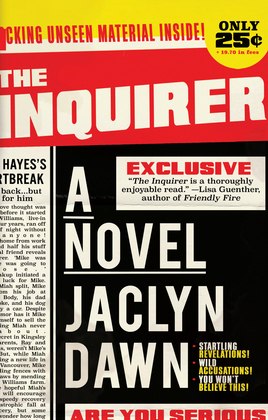 by Jaclyn Dawn (Author)
Excerpt Buy for $11.99
Fiction Literary English literature American and Canadian literature
warning_amber
One or more licenses for this book have been acquired by your organisation details

When an accident jeopardizing the family farm draws Amiah Williams back to Kingsley, Alberta, population 1431, she doesn?t expect her homecoming to make front-page news. But there she is in The Inquirer, the mysterious tabloid that is airing her hometown's dirty laundry. Alongside stories of high school rivalries and truck-bed love affairs, disturbing revelations about Amiah's past and present are selling papers and fuelling small-town gossip. As the stakes get higher, Amiah must either expose the twisted truth behind The Inquirer or watch her life fall apart again.

Jaclyn Dawn's debut novel provides an incisive look at the lingering consequences of past relationships and the price of both staying silent and speaking up.

Praise for The Inquirer:

"A clever novel that reveals both the anxieties and strengths woven into tight-knit communities. The Inquirer is a thoroughly enjoyable read."
~ Lisa Guenther, author of Friendly Fire

"In The Inquirer, Jaclyn Dawn has crafted something so rare?a great story full of fascinating characters, sly humour, and understated intelligence?that news of its appearance might just get reported in the tabloids her novel so lovingly satirizes. Amiah Williams's journey back to her hometown of Kingsley, Alberta, is funny and winning, neither of which factors obscure the troubling realities young women too often face.?
~ Curtis Gillespie, author of Almost There

"A bildungsroman that never drags, Dawn's debut novel is appealing both in its innovation?it intersperses newspaper articles from the Inquirer throughout?and its unexpected insights from Amiah, its well-drawn narrator."
~ Kirkus Reviews