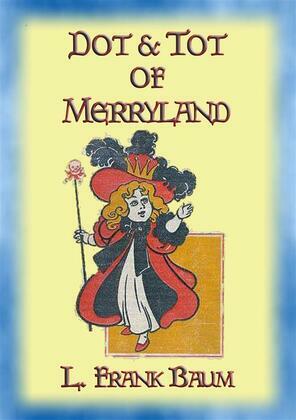 Dot and Tot of Merryland is a 1901 novel by L. Frank Baum, who also wrote The Wonderful Wizard of Oz. He wrote this story about the adventures of a little girl named Dot and a little boy named Tot in Merryland which is reached by a river which flowed through a tunnel. Merryland is split into seven valleys. The book was illustrated by artist W. W. Denslow, who had illustrated three previous Baum books.

Evangeline "Dot" Freeland is sent to her rich father's country estate Roselawn for her health. She soon meets the gardener's son "Tot" Thompson, who becomes her friend and playmate. One day, they have a picnic and sit in a boat they find by the river, which gets away and takes them to a passage in a cliff face that brings them to the magical country of Merryland.

Merryland is made of seven valleys, arranged in a circular pattern connected by a river running through them. The first valley is populated by clowns, the second is a land in which everything—including the people—is entirely made of candy, and the third the valley where babies grow from blossoms before storks deliver them to their parents. The fourth valley is populated by living dolls and is also the home of the Queen of Merryland, a large wax doll who makes Dot and Tot her adopted children. After Dot and Tot have a day of running the valley by themselves, the queen joins Dot and Tot to see the remaining three valleys.

The fifth valley is populated entirely by cats, the sixth valley is run by Mr. Split, who makes wind up animals. The final valley is the Valley of Lost Things, where every lost item goes. Tot finds a doll he'd lost and is allowed to take it with him. The Queen decides to allow Dot and Tot to travel onward, which will take them back to Roselawn, but she will close the way to Merryland forever. Returning to the river, Dot is found by her father who notices that she no longer looks sickly. Tot deduces that the Queen of Merryland—who was either interrupted or forgot to answer when asked her name—must be named "Dolly."