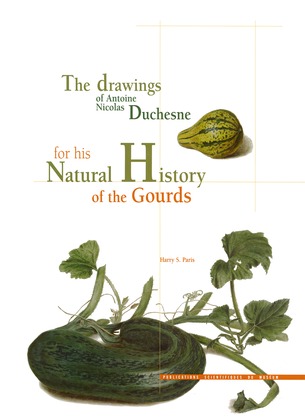 For the first time, this book makes available to a wide readership, not only to an educated audience, high-resolution reproductions of all the 258 paintings of gourds of the genus Cucurbita, figuring about a hundred cultivars, kept at the Bibliothèque centrale of the Muséum national d’Histoire naturelle, made in the 18th century by the talentuous Antoine Nicolas Duchesne, of the Royal Garden in Versailles, a forerunner of genetics and evolution. This book by Dr. Harry Paris, a leading expert of Cucurbitaceae, is written both in English and French and is aimed at scientists (e.g., botanists, geneticists, agronomists, horticulturists, science historians) as well as more general readers including gardeners, above all those very numerous fond of cultivated plants, particularly of Cucurbitaceae. Its large format (320 x 440 mm), the diversity and magnificence of its plates and the beauty of its presentation will also attract bibliophiles. This volume is not only the first publication to contain Duchesne’s naming and classification of the three economically most important species of Cucurbita, it also contains Duchesne’s summary of his investigations with this genus. The plates are accompanied by reprinting of appropriate abstracts from Duchesne’s Essai sur l’histoire naturelle des courges together with, by Harry Paris, commentaries on the illustrations with an analysis of existing published and unpublished documents concerning these plates. As for his work on strawberries, here once again is stressed the unfailing tenaciousness and extraordinary sense of observation of Antoine Nicolas Duchesne coupled with quite original and premonitory evolutionary ideas.