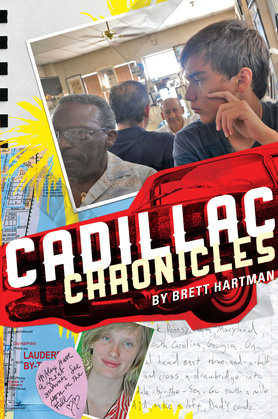 Sixteen year-old Alex Riley’s top priorities in life are to find his long-absent father and a girl with a decent set of breasts. But his mother has a knack for sabotaging his plans. To advance her political career, she takes in an elderly black man named Lester Bray. Lester arrives with a vintage Cadillac and an old man's personality. It takes only a week for Alex's mother to ask Lester to leave. That makes Alex angry. On the morning of his eviction, Lester and Alex set out on a road trip ostensibly to find the boy's father in Ft. Lauderdale. But the two don't just head south. They also cross through un-navigated political, racial, and personal territory. A wild ride, Cadillac Chronicles explores what it means to—finally—find a real friend.

Brett Hartman lived an unremarkable life in Fort Lauderdale until May 18, 1983, when he was arrested for aggravated battery. While away at Auburn University, he suffered a psychotic breakdown and months of intensive treatment. Though he made a full recovery, the events of that period never left him. He continued his education at Indiana State, where he received a doctorate in clinical psychology; he has worked as a psychologist ever since. His memoir Hammerhead 84 covers his journey through the mental health industry. Cadillac Chronicles is his debut novel. He lives in Albany, New York, with his wife and their two sons.