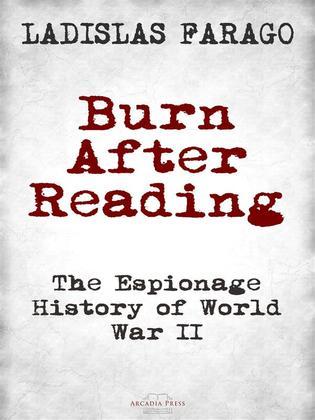 Espionage has played a conspicuous and often memorable part in every war of history, but it was not until the Second World War that it became a kind of Fourth Estate of war. The nature and scope of this bitter conflict produced special armies that fought clandestinely behind the lines and on their own fronts.

Espionage was practiced by both sides, but only on the Allied side was it such a vast enterprise. This is understandable; in the occupied countries of Europe and Asia it was the only opportunity for the oppressed to defy and harm the oppressor. It was this spontaneous rebellion born in the soul of men and borne by their indomitable will to freedom that endowed the dubious business with an aura of decency and that justified its larcenies and homicides.

While this book deliberately refrains from drawing any conclusions, its facts — projected against the giant screen of current history — may still supply certain pragmatic lessons. The emphasis is on the facts. They are, as Churchill put it, so much better than dreams.