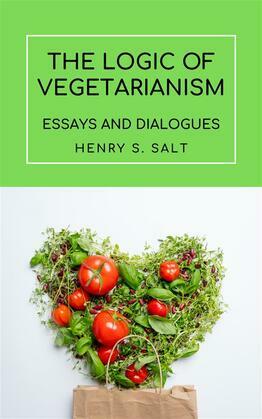 The Logic of Vegetarianism

Henry Stephens Salt  was a noted ethical vegetarian, socialist, humanitarian and pacifist. It was Salt who influenced Gandhi's study of vegetarianism. He is credited with being the first writer to argue explicitly in favour of animal rights (1892). He was way ahead of his time in his approach to animal welfare.

Henry Salt is indeed an interesting turn-of-the-century writer whose ideas have been greatly influential and whose books are still worth reading.

With clear logic and entertaining dialogues, the author presents many reasons for a vegetarian rather than a “flesh-eating” diet. Defining vegetarism as Moral Choice, the book incline us to think upon the reforms in diet.

Excerpt: «It is the special purpose of this book to set forth in a clear and rational manner the logic of vegetarianism. To the ethical, the scientific, and the economic aspects of the system much attention has already been given by well-accredited writers, but there has not as yet been any organized effort to present the logical view—that is, the dialectical scope of the arguments, offensive and defensive, on which the case for vegetarianism is founded. I am aware that mere logic is not in itself a matter of first-rate importance, and that a great humane principal, based on true natural instinct, will in the long-run have fulfillment, whatever wordy battles may rage around it for a time; nevertheless, there is no better method of hastening that result than to set the issues before the public in a plain and unmistakable light. I wish, therefore, in this work, to show what vegetarianism is, and (a scarcely less essential point) what vegetarianism is not.»