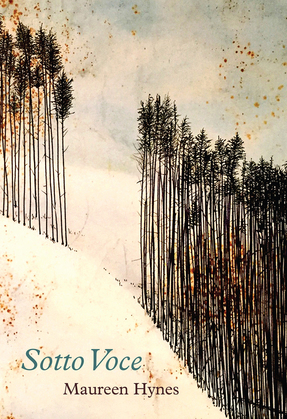 Poems that give full attention to a world in shambles,
a world in which ?mercy is failing.?

Maureen Hynes, in her fifth book of poetry, speaks tenderly yet vehemently about the threatened worlds that concern her. From Toronto, where she lives and walks the city?s afflicted watershed, she turns her attention to the near and far, shifting it from the First Nations? stolen lands to Syria and the refugee crisis in the Mediterranean; from the deaths of family and friends to the newborns into whose care our endangered planet will pass; and from love?s transient regrets to the sustaining love two women share. Hynes? is a gaze that grieves quietly, delights humbly, and, in the search for solace, never rests. Each poem in Sotto Voce is a recitative of healing. Hear the music in every word and, despite the damaged environments Hynes gives voice to, be restored.
This is a book that bears witness to the ?dynamite stick of injustice,? one that balances fear and hope, misfortune and renewal, calamity and natural beauty. Sotto Voce carries the complexity and seriousness of its themes lightly?it?s important to know when to speak loudly, and when to whisper.

??Sotto Voce is the sound of one of Canada?s most accomplished poets writing at the height of her powers.? ?Jim Johnstone

"Whether speaking about nature, or politics, or love, Maureen Hynes does so with candor and compassion. These poems are generous and assured, and the world they circumscribe is the urgent, beautiful, dangerous place where we all live. Read Sotto Voce. Maureen Hynes is a poet at the top of her game.?
?Helen Humphreys