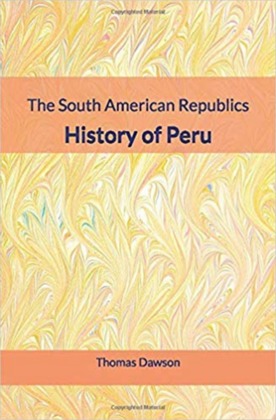 pThis book deals withe the history of Peru: the discovery of the Inca empire, the Spanish conquest of the territory, the colonial period, the wars of the independence and the development after the independence. "For many centuries before the Spanish conquest and before the rise of the Incas a succession of great empires existed in Peru. Ruined edifices of unknown date prove that at some remote period advanced civilisations and powerful nations were developed in the coast valleys and on the Andean plateau. In tombs which vastly antedate even these megalithic palaces and fortresses, cotton twine, woven cloth, and cobs of maize have been found. The domestication and breeding to perfection of the llama as a beast of burden, and the alpaca as a fleece-bearer, the development of potatoes, maize, and the quinoa grain, must have consumed untold cycles of time. There is no doubt of the remote antiquity of the civilisation of the Indians who inhabit the Andean plateau south of the equator, nor that their culture was wholly self-developed, owing nothing to outside influences. About the year 1000 the Incas were merely one of several tribes living on the high, beautiful, and fertile plateau of Cuzco, which lies on the eastern edge of the gigantic uplift of the Andes. Down the precipitous gorges into the steaming and impenetrable forests of the Amazon plain the civilised Indians never cared to go. The maize, quinoa, and potatoes upon which they depended for food could not flourish in the intense heat and heavy rainfall of those regions. Neither themselves nor their llamas and alpacas could thrive in the montaña or forested plain. Their natural habitat was the rough plateau, broken by numerous valleys, which lies between the Eastern and the Central Cordilleras, and extends from the Vilcañota "nudo," shutting it off from the Titicaca basin, to the transverse range of the "Cerro de Pasco," in the North. The ocean lies two hundred and fifty miles south-west, beyond the Central and Maritime Cordilleras and the bleak plateau which lies between them. This great central section, on whose eastern edge near its southern border we first find the Incas, is the heart of Peru. ..." /p