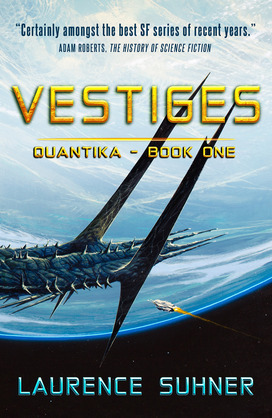 Place: Gemma, a "snowball" planet, i.e. a terrestrial extrasolar planet with overall glaciation, orbiting around the binary star, Altamira (an Alpha Centauri type), discovered in 2012 by Michel Mayor's team at the Geneva Observatory. We are in the same galaxy as our own, 6.5 light-years away. This is the most distant human colony. A one way trip of more than seventeen years.

Context: A huge spaceship in orbit, Le Grand Arc, a phantom vessel which has never shown any sign of life and remains inaccessible. In addition, on the planet itself extremophile micro-organisms discovered by the first wave of explorers one hundred and fifty years earlier, prove that more complex forms of life must have developed before the glacial period. A fascinating research project for the ambitious young microbiologist Ambre Pasquier.

Soon after she settles there the young woman starts to be haunted by dreams that put her in contact with the traces of the first visitors to Gemma, the Constructors... It becomes an obsession and she organises a scientific expedition - the Archea Mission - whose official aim is to look for primitive forms of life in the glacial layers. In fact, she has a completely different objective - keeping it secret to avoid interference by the militia, a pseudo-military organisation having recently taken control of the colony. A passage has to be cut through the ice by means of a giant tunnelling machine to get to the rock substrata and ruins that Ambre is certain of discovering there. Around twenty scientists have been recruited: Glaciologists, geophysicists, exobiologists, geneticists, climatologists, engineers, doctors... Two people have infiltrated the team: one on behalf of a group of physicists who for over ten years have been studying the particularities of a specific planetary zone affected by fluctuations of the space-time field. The other works for the military personnel who have recently taken control of the colony.

The expedition turns into chaos.