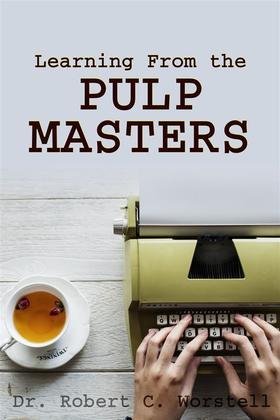 Learning From the Pulp Masters

If you could sit at the feet of the Pulp Masters to learn - would you?

This is a compilation of notes I had left over from research into how those prolific authors of old made a good living from writing - well before the Internet and word-processors.

I got into studying the pulp-magazine era authors with Lester Dent while I was studying the conventional wisdom of "plotting”. Then I found more and more authors who had thrived during those early years and became Brand Name authors that we all grew up with - or at least can discover now.

This last find, of H. Bedford-Jone's “This Fiction Business” is so conclusive that very little else is needed. There, he tells the variety of issues that authors of his day encountered.

This book is a companion piece to that book and so doesn't need to repeat any of his jocular description of how he made a very good living writing and selling stories during that age.

But you'll find many other authors have some advice that might prove very valuable in streamlining your own production and hitting their "million words a year" output.

I sat out at the beginning of 2018 to write fiction short stories every week, following the footsteps of Louis L’Amour, Jack London, Mary Roberts Rinehart, Robert Heinlein, Ray Bradbury, and many others. Their general consensus was that achieving the target of 50 short stories was the first step.

I ended up finding that writing at the million-word-per-year level of Erle Stanley Gardner and H. Bedford-Jones (as well as several other pulp-method writers from the 20’s to 50’s) is actually easier than it seems. There are some caveats, but not very many

“No One School Has All the Teachers”

This is an old oriental saying (Japanese, if not even earlier) that describes the state of advice out there about how to write, as well as how to publish. I assembled 227 books on the writing craft, then narrowed these down to less than 20 worth really studying. But none of those had all the answers. They only had answers for themselves and their own production systems. And when I took their lessons and tested them, I only assembled a method of writing that worked for me.

You Can Only Compare Yourself With Yourself

Other people have what works for them. Getting down on yourself because you haven’t already cracked 6- or 7-figures of income helps no one. That is the typical problem with many courses about writing and publishing books – they keep touting the “million-dollar” results – and seldom tell about the quiet successes of people simply enjoying their writing and getting some income from it – enough to at least pay for their expenses (or not.) And I made about as much at the end of this year as I was at its beginning. Because I was working on the writing habit, not the income habit. (And these are both habitual mindsets you train in over time...)